Everyone knows that Coca-Cola are great at producing innovative, exciting advertising campaigns. I’ve talked about them several times on this blog, here, here and here, about their various different “share happiness” campaigns. This one however was definitely one that made me think “I wish I’d thought of that” and also made me wonder why they hadn’t created it sooner as it seems to me to be the obvious thing to do based on the slogan.

Ogilvy & Mather Singapore came up with the simple idea of having the can itself as the thing being shared. A simple twist and pull splits it in half, allowing you to share the product with a friend and the above video shows just how popular it was. It even features a nice little nod to Jonathan Mak’s Coca-Cola advert at the end.

Not wanting to be outdone on the creative advertising front, Pepsi created their own campaign with the help of Belgian advertising company TBWA.

Simply liking the Pepsi Facebook page gives you a free Pepsi in a way similar to the previous Coca-Cola campaigns that gave you free stuff for doing things. It’s perhaps too similar I feel, as although it’s using something innovative that Coca-Cola hasn’t used before in Facebook likes, the whole principle behind the idea is just the same. But that’s just my opinion.

Both found via Design Taxi

So they’ve done it again. Obviously not content with the fantastic interactive advertising of theirs that I have looked at before, Coca-Cola has really pushed the levels of interaction between the public and vending machine in these two new campaigns.

The first is from Korea where they seem to have taken a leaf out of Fantastic Delites book by getting the public to work for their free Coke. Korea seems to have a lot of professional break-dancers and hand-shakers by the looks of it.

END_OF_DOCUMENT_TOKEN_TO_BE_REPLACED

Ok, so this may not be the most up to date post as this advert was created in late 2009, but I found it on helloyoucreatives.com this morning and had to blog about it.

I know I’ve written about Coca-Cola adverts several times before (here and here), however I’ll justify another blog post about them with two points:

To promote a new bottle and the grip it possessed they produced simple adverts showing the new bottle which were placed in bus shelters around Paris. The interesting difference between these adverts and conventional ones however, was that these adverts were made entirely from velcro to strengthen the grip concept. 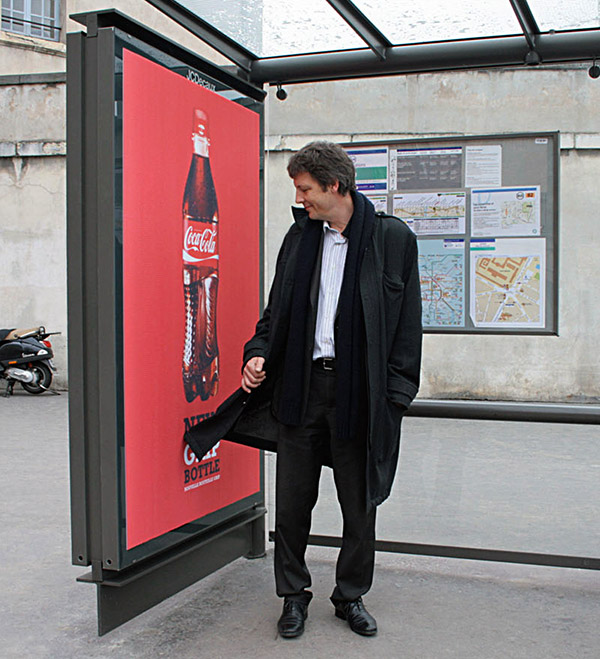 END_OF_DOCUMENT_TOKEN_TO_BE_REPLACED

I was going to post about Benzanoe Issue 65 in today’s post, however I’ve decided to do that tomorrow after I found this great piece of advertising.

Coca-cola and their advertising campaigns are something which I have covered before on this blog, however I felt that this one, which won a Cannes Grand Prix this year was too good to not do a post about it. Designed by 20 year old Hong Kong student Jonathan Mak in conjunction with Coca-cola and Ogilvy & Mather Shanghai it takes the well known ribbon from the Coca-cola logo and transforms it into a hand passing another a bottle of Coke.

END_OF_DOCUMENT_TOKEN_TO_BE_REPLACED

Coca-Cola’s latest advertising slogan is “Open happiness”, and recent marketing of theirs has reflected this statement to great effect. These fantastic viral campaigns all centre around providing the public with free things and therefore happiness.

This first one was designed by advertising agency Ogilvy & Mather and features a vending machine with the words ‘hug me’ on the front in a Coca-Cola style typeface. People who gave the machine a hug were given a free can of Coca-Cola.