Ogilvy & Mather are a world leading advertising agency who have offices in around 120 countries worldwide. They have worked for many high-profile clients such as British Gas, Coca-Cola and IBM, however I only found out about them and their work recently after researching into two great advertising campaigns that I have found in the past few days.

Both campaigns do not advertise the product through images of it, instead referencing it in other ways. This creates a simple advertisement that is focused on a really strong concept. Their work for Tabasco is a simple series of images of food exploding. This references the explosion of flavour that Tabasco would give. The images created are a fantastic visual, showing the food frozen mid explosion which really draws you into the advert, with the Tabasco logo in the top right corner telling you what the product is.

My favourite piece of work by Ogilvy & Mather however, is their campaign for LEGO which won a D&AD Yellow Pencil in 2012 in the posters category. Using bus stop style advertising shells and thousands of pieces of LEGO, they created a collection of three bright and colourful posters made entirely from the plastic bricks. Each poster depicts the view behind it populated by a LEGO creature, therefore serving as a sort of window through which you can see the world differently. The simple tagline of ‘Imagine’ really works well with the concept of encouraging your imagination and for you to see the world differently, which is pushed further by the great touch of the poster actually being made from LEGO bricks. 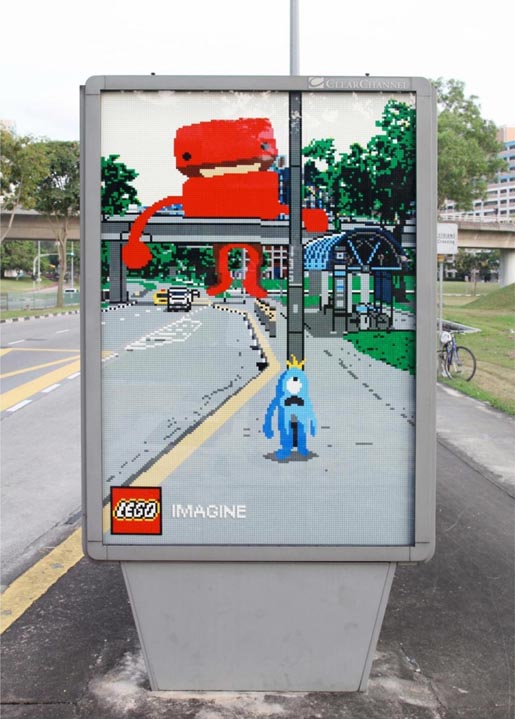 These two great advertising campaigns show that you don’t have to use images of a product to get across its purpose.

Ogilvy & Mather have also produced a great range of video advertisements, so I’ll leave you with these two: